Neil Hayward called me early last week to ask me if I wanted to join him and his partner, Gerri, to try for the Key West quail-dove.  The plan was to fly to Florida Thursday afternoon, and have 2 full days on Friday and Saturday to try to see it.  Since the bird had been seen again on 11/28, 12/2, 12/5, 12/6 and 12/8, I said I would join them hoping for success after failing before Thanksgiving.  We flew into the Ft. Lauderdale airport at dark, and stopped at Kendall Lakes to see if we could find the Egyptian goose for Neil.  There were plenty of muscovy ducks, but apparently the geese go to a roost at night. 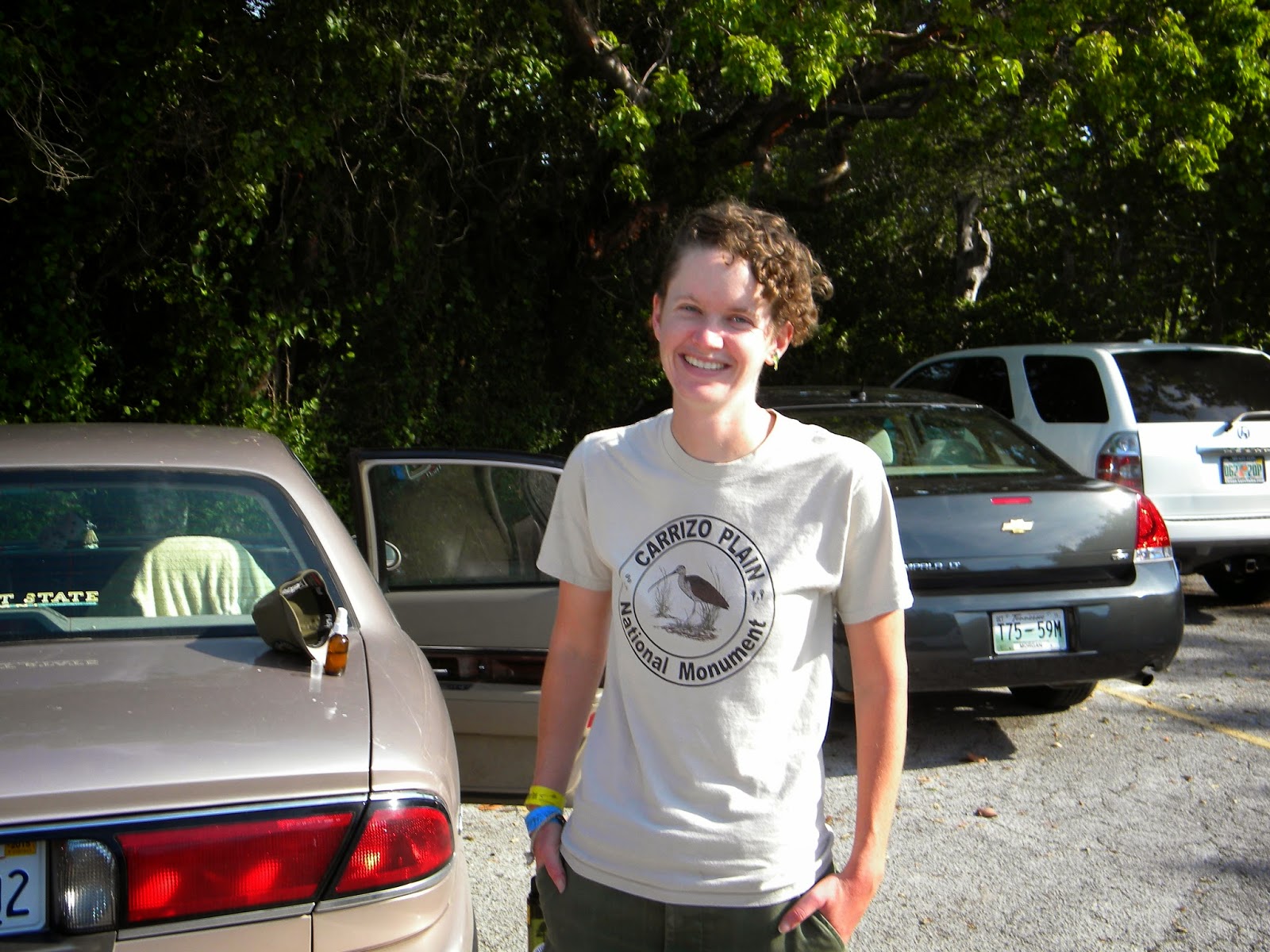 Neil and I were at Long Key SP at first light Friday morning.  Soon after we ran into Allison Fox who had seen the bird the morning before (all photos are mine unless indicated otherwise--click on any photo to enlarge).  We split up to cover more of the trail.  5 minutes later she came running up to us to say the quail-dove had walked across the trail about 100 yards from where Neil and I were.  We rushed back, and fortunately were able to relocate it about 100 feet off the trail feeding on the ground.  We both were able to get identifiable looks at the bird before it vanished from sight. 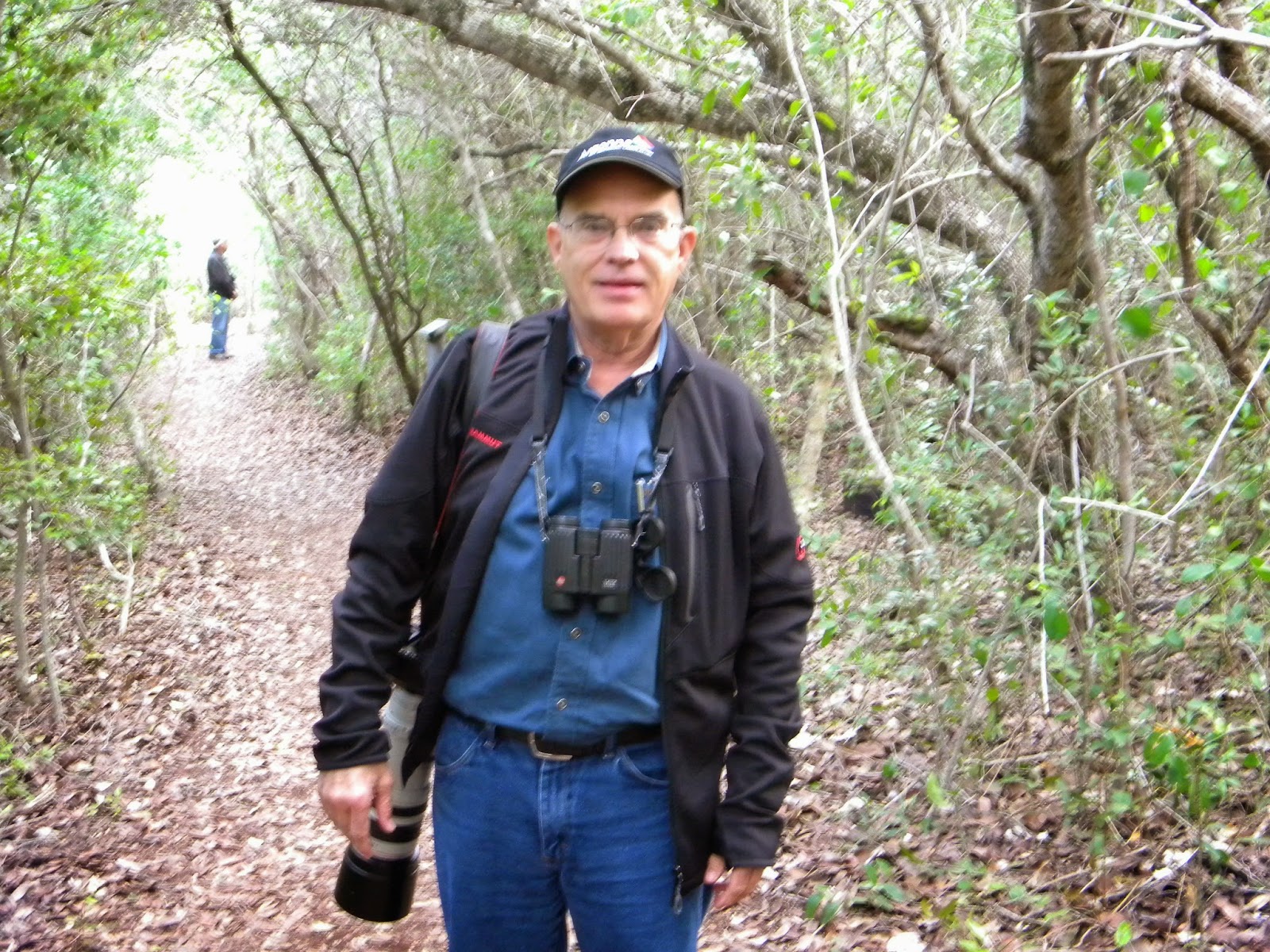 Within the next 30 minutes another 1/2 dozen birders joined the hunt.  One of them was Barrett Pierce who I had run into at Cape May chasing the whiskered tern in September.  I met Barrett back in 2010 during my lower 48 big year, and then next saw him in August of 2011 at Coney Island when we both missed seeing the gray-hooded gull by one day. 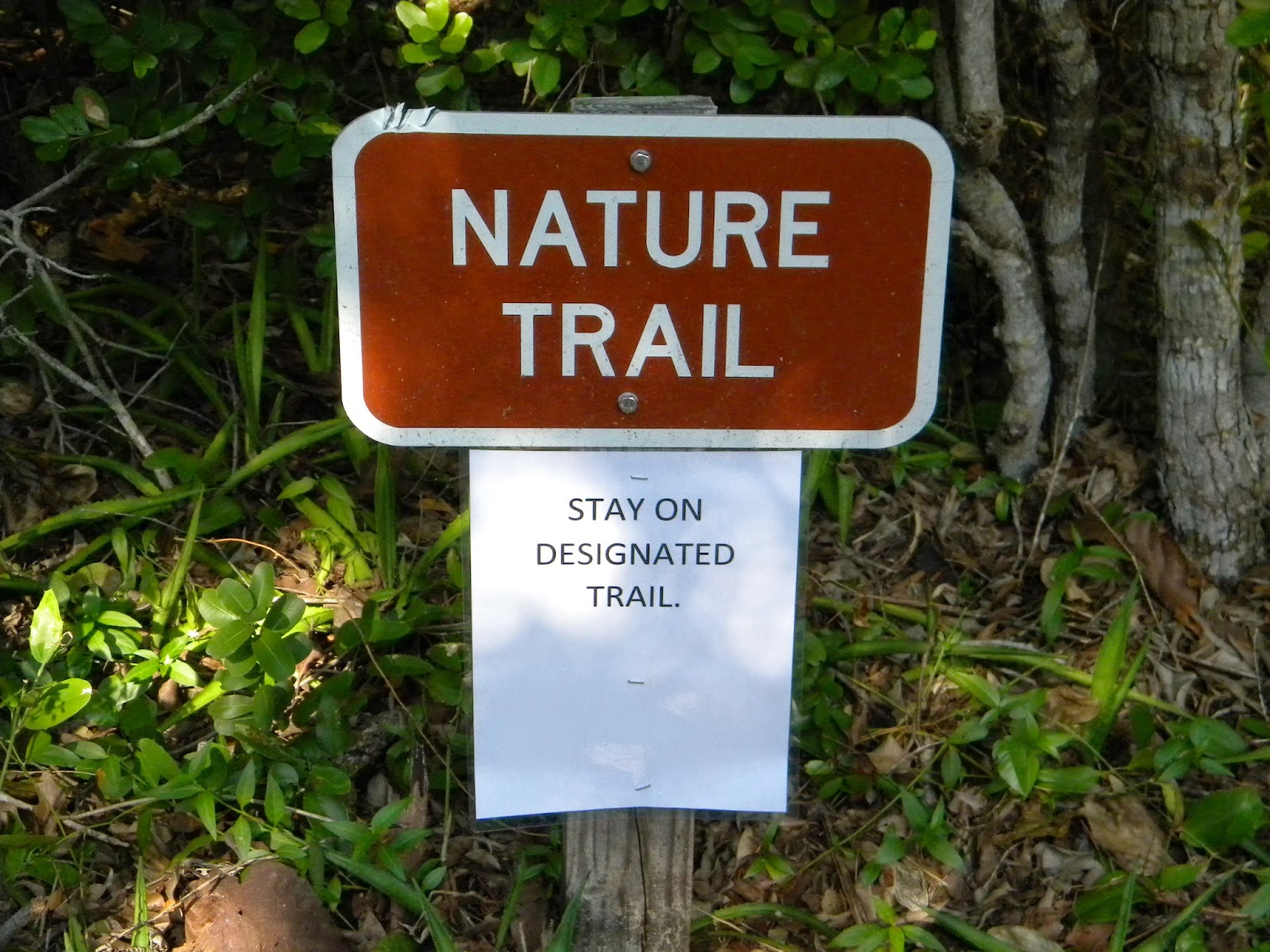 All of us kept patrolling the trail in hopes that the quail-dove would walk out again.  We also were listening very closely to try to hear the bird shuffling thru the dry leaves on the ground.  At one point 2 of the park rangers came through, and did not seem very happy that over the weeks of birders looking for the quail-dove a couple of side trails had been used.  As a result, they took downed wood and blocked the side trails.  Then they put up new paper signs at the beginning of the Golden Orb nature trail.

At one point mid-morning we went to check the edge of the parking area when a large group of turkey vultures rose up off their roost.  About 11:30, Neil was walking the trail where it changes from hardwood hammock to mangroves when the quail-dove appeared right by the trail.  It flushed back about 20 feet.  By the time the rest of us got to his location, it had once again walked out of sight.  At 12:45, another birder found it about 100 feet from the prior sighting near some gumbo-limbo trees.  Before any other birders could join him, the quail-dove once again disappeared. 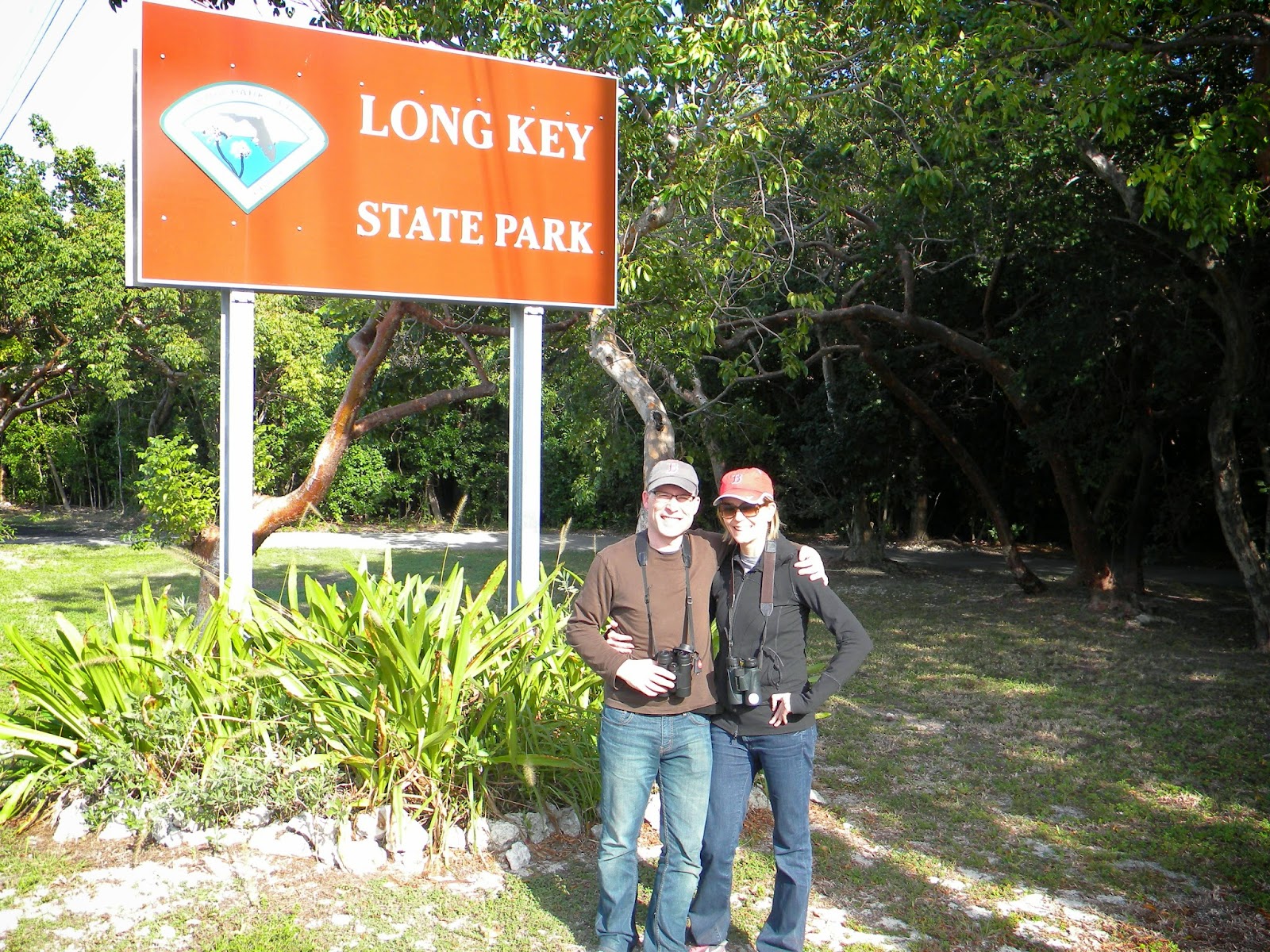 After 3 sightings which totaled less than 1 minute of viewing, only 4 birders had gotten identifiable looks at the bird, and no photos had been taken.  Gerri had not seen the quail-dove, so we continued to look for it until 2:30 when we decided to head back towards Miami.  As we left the park I got a record shot of Neil and Gerri.

Neil had made a dinner date for us all to have sushi at a restaurant in Coral Terrace recommended by Carlos Sanchez--a young professional bird guide who lives in Miami.  On the way to dinner, we stopped at Kendall Lakes just as it got dark, but there were no Egyptian geese still at the lake.  We met Carlos at 6:30, and talked birding over some very good sushi. 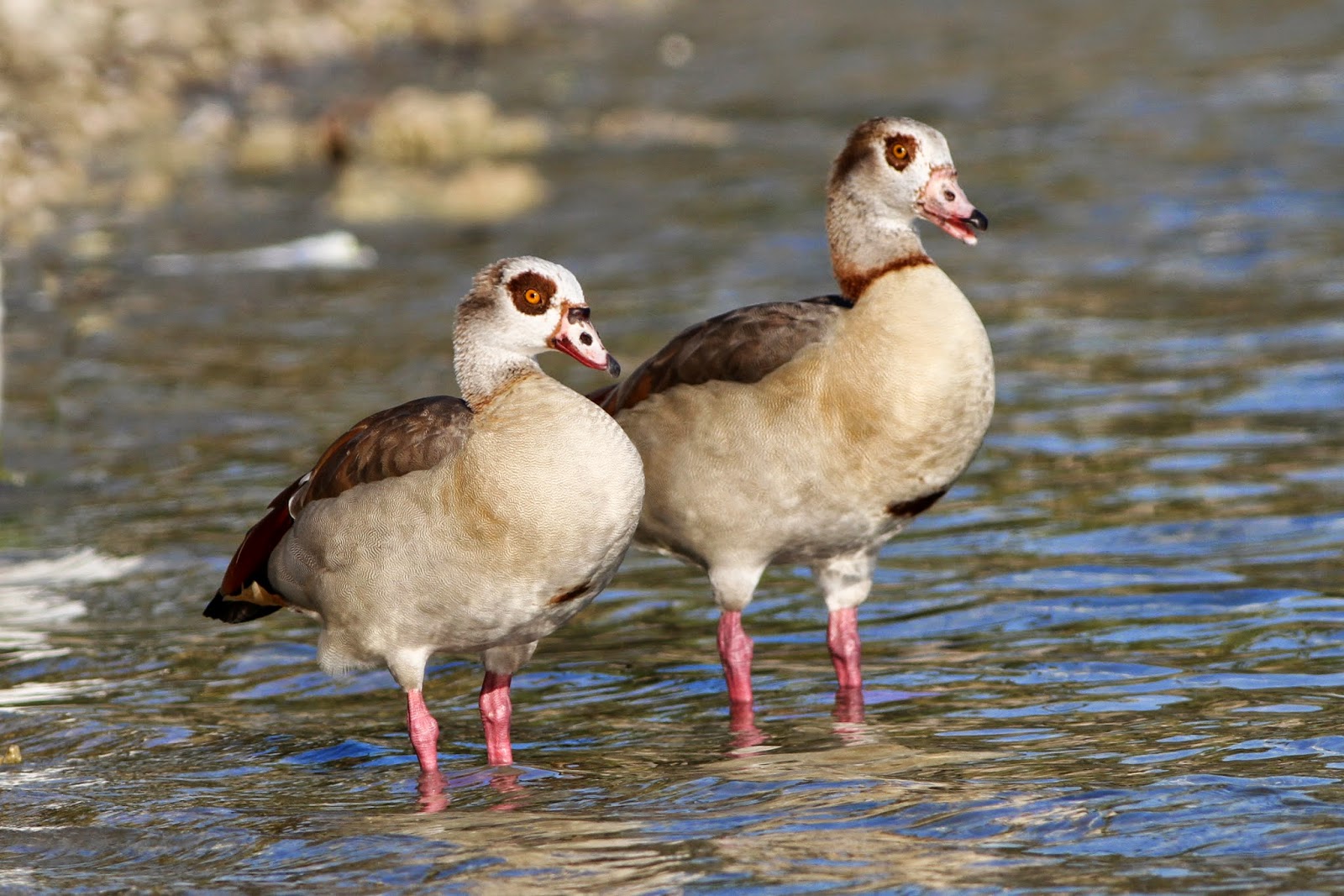 The next morning we decided to start at Kendall Lakes, and this time Neil (his photo) was able to finally add Egyptian goose to his ABA life list.  We then stopped at a new location that Carlos had told us about where he has found several red-whiskered bulbuls.  As soon as we got out of the car we heard them calling, and ended up seeing 7 in all (Neil's photo). 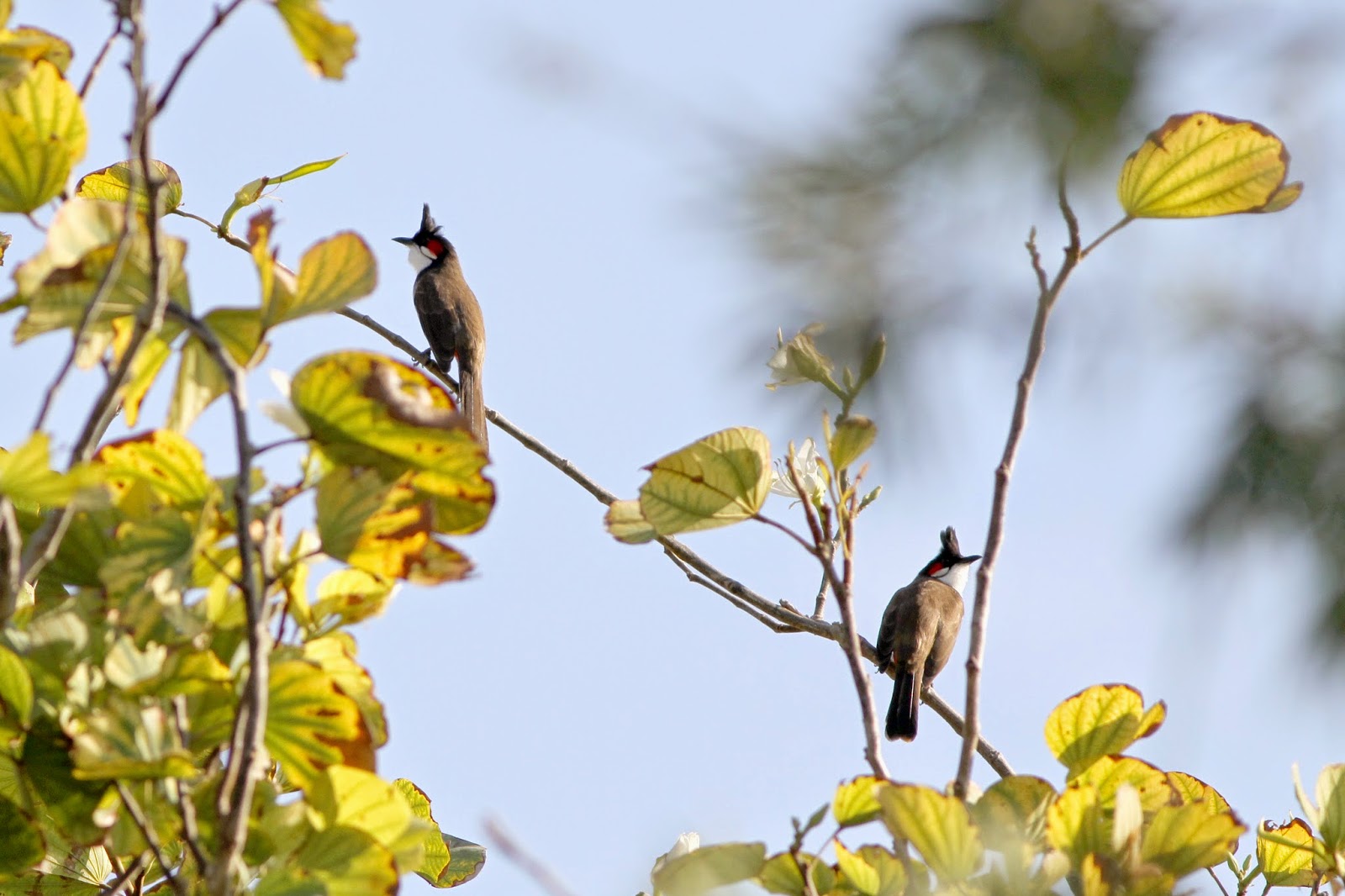 Our main destination for the morning was to bird Matheson Hammock Park.  Since it was Saturday morning, there were many people in the picnic area including a wedding party.  The birding was pretty slow (palm, black and white, prairie, Nashville and parula warblers; blue-gray gnatcatchers; 1 blue-headed vireo; and 2 fly-over dark morph short-tailed hawks) until we were graced by the presence of a loud and so very striking blue and yellow macaw (Neil's photo). 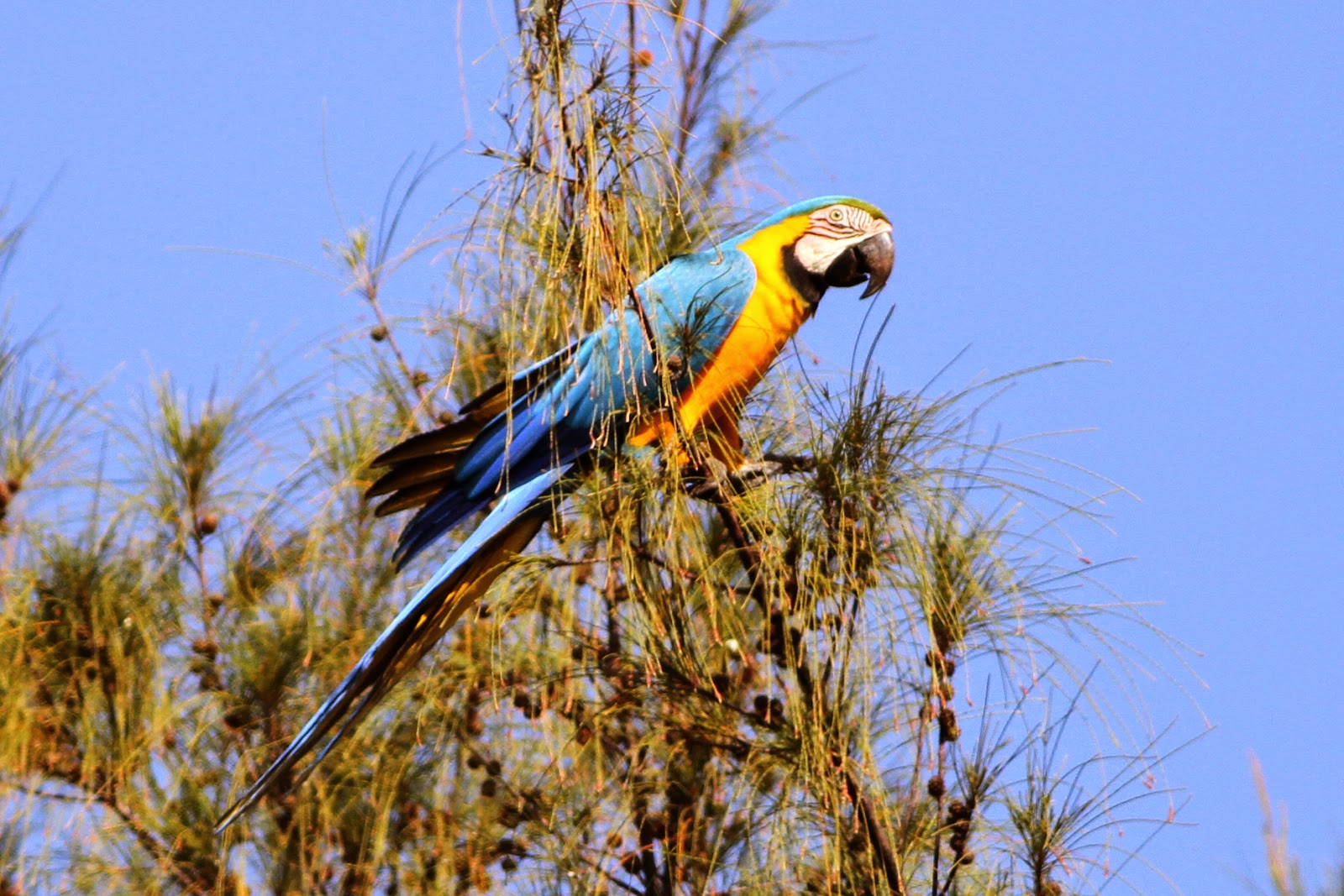 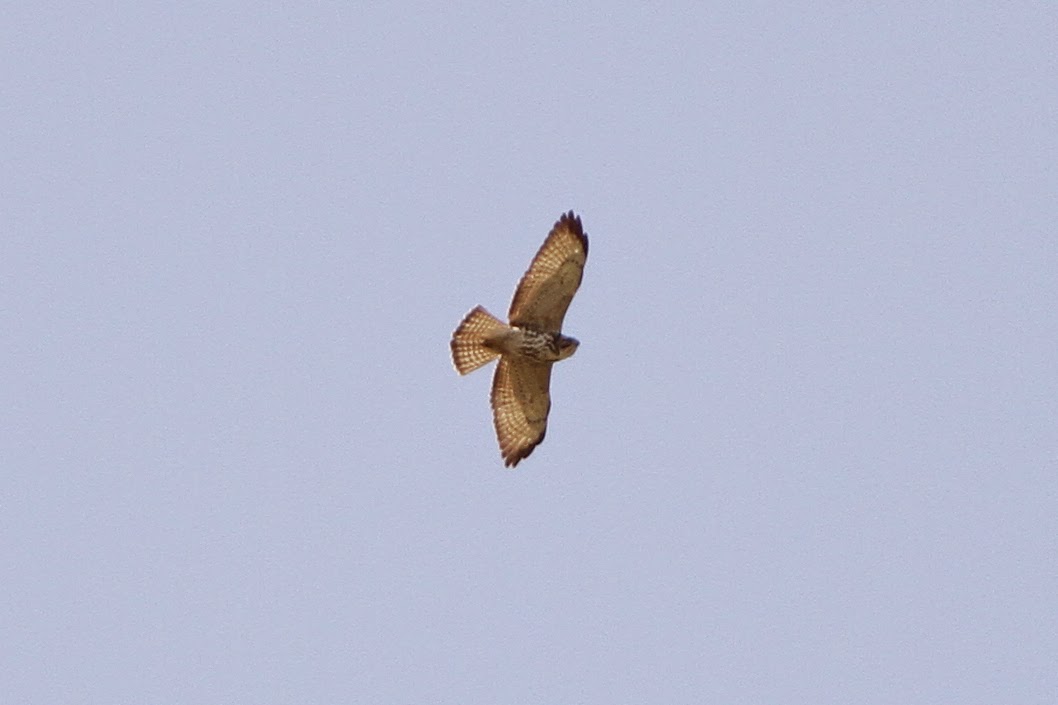 We then checked out the mangrove section of the park where we had mostly shorebirds (killdeer, ruddy turnstones, and spotted sandpipers), an eastern phoebe and a great crested flycatcher.  Next we went to the west section of the park which is usually good for parrots and parakeets.  We found a juvenile broad-winged hawk and a kestrel (Neil's photos), and met some other birders, one of whom had gone to Long Key SP 6 times before finally seeing the quail-dove.  While we were walking, we heard a group of parrots flying by, but they did not land. 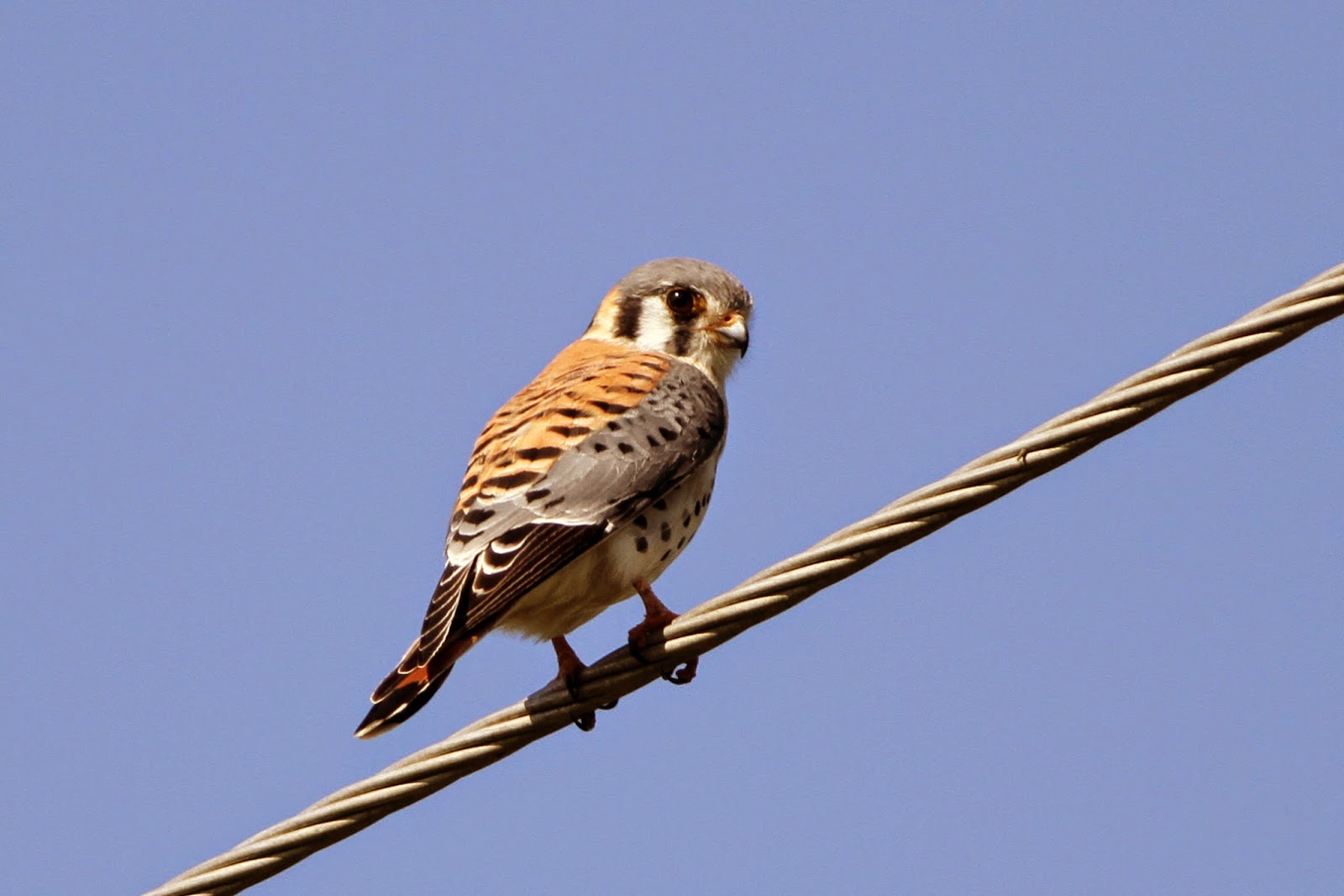 After a short lunch, coffee and tea stop at Starbucks, we went to check out one more location in hopes of seeing cave swallows and white-crowned pigeons. We were too early for the swallows to have returned to their roost, and there were no pigeons either.  We did see several iguanas (Neil's photo), and found 2 or 3 manatees feeding in the canal.  It was now 3 PM, and there was not much chance of finding other interesting birds.  Neil and Gerri had plans to meet friends up in West Palm Beach, so they dropped me at the Miami airport where I read a good book until my flight back to Chapel Hill. 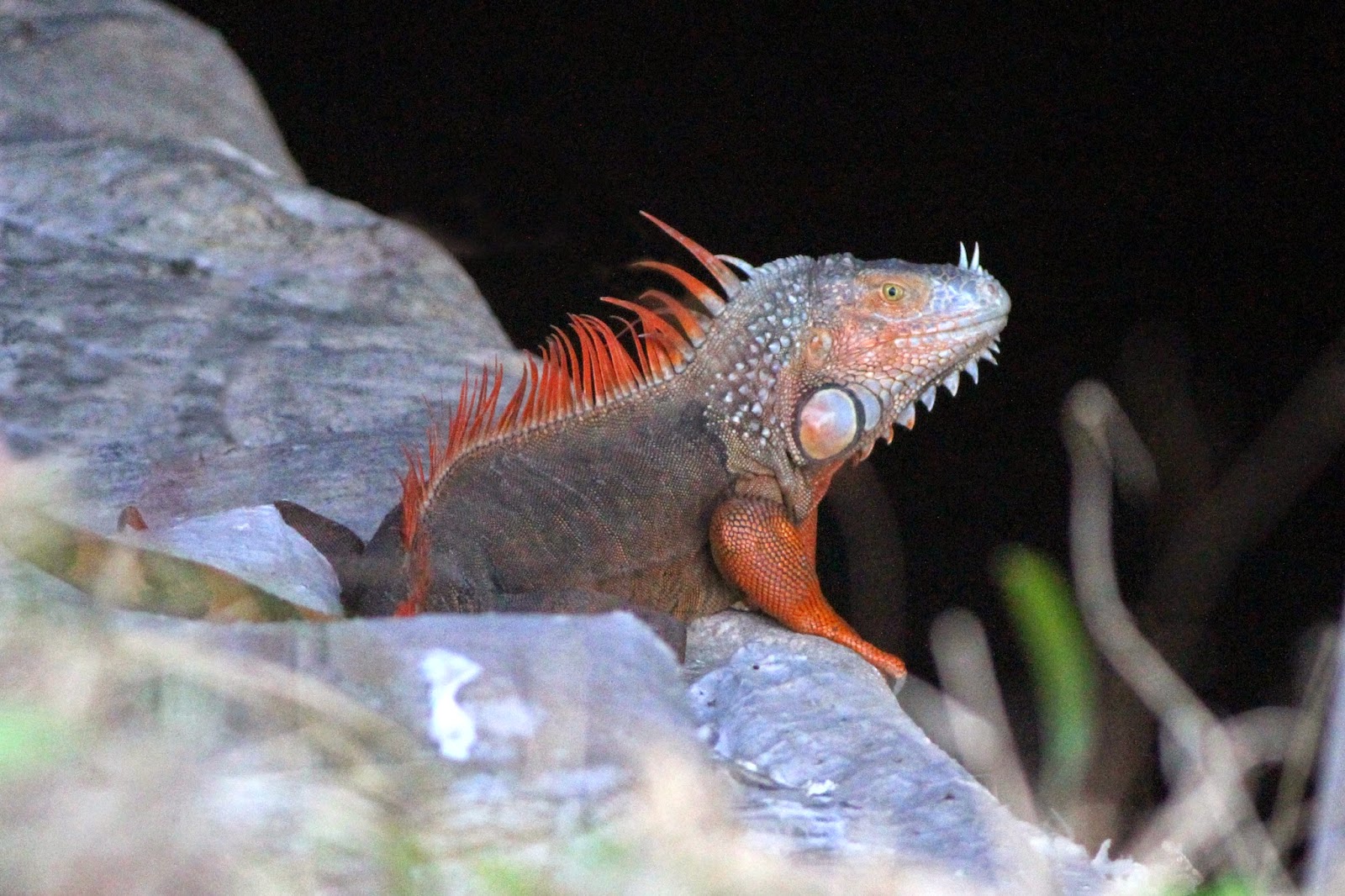 Sitting at the airport also gave me some time to reflect on just how frustrating it had been trying to see the Key West quail-dove.  In birding I have learned that there are satisfactory looks (meaning you are able to ID the bird), and then there are the much better satisfying looks where you get to spend long quality viewing time with a bird.  I concluded that my 10 second ID look had to be the least satisfying tick of a life bird that I have ever had in my 40+ years of birding.   That said, I am still very happy to have at least been able to see the quail-dove well enough to ID it.  I also heard since I got back home that Barrett did finally see the bird on Sunday, but was not able to get a photo either.  And yesterday, 3 other birders I know, Liz Southworth, Dave Nelson and Matthew Matthiessen were able to see it well including getting photos.  My next post will be my wrap up on birding in 2014.
Posted by Chris at 11:44 AM 1 comment: 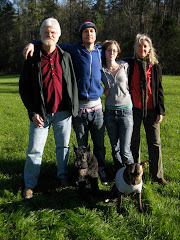